Eric Olsen, You Got Served! 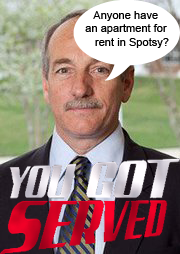 It looks like Eric “Law & Order” Olsen’s string of thumbing his nose at the law has finally caught up with him.

Stafford County resident David Johnston has formally filed a Petition for a Writ of Quo Warranto pursuant to §8.01-636(A)(4) and §8.01-637 of the Code of Virginia, 1950, as amended, to challenge the qualification of Eric L. Olsen to be on the ballot as a candidate for the Office of Commonwealth’s Attorney for Stafford County.

The press and supporters of his republican primary opponent first raised the question on Olsen’s residency back in July. Press reports, at the time, reported that he had moved out of his house in the City of Fredericksburg and into a garage apartment off Poplar Road in Stafford – while his wife and son remained at the family home in the city.

According to Johnston’s filing today, the garage apartment wasn’t even a valid residence:

(13) On defendant Olsen’s Certificate of Candidate Qualification, Olsen swore under oath that he resided at 1257B Poplar Road, Stafford, VA 22556.

(14) Upon information and belief, the residence otherwise known as and located at 1257 Poplar Road is zoned for one (1) residential home.

(15) Upon information and belief, the zoning ordinance(s) of Stafford County does not allow for a second address on a residential parcel zoned for one residence.

(16) Upon information and belief, there were no occupancy permits issued by Stafford County for a second dwelling at 1257 Poplar Road.

(17) Upon information and belief, there is no address on record in Stafford County known as “1257B Poplar Road.”

Additionally, according to the filing, Olsen “gave as his Post Office address on the Statement of Candidate Qualifications the mailing address of the Office of Commonwealth Attorney in Stafford County which is P.O. Box 66, Stafford, Virginia 22556.” Wowsers!

The illegal apartment notwithstanding, it’s also clear from the filing that Olsen has no intention in abandoning his long established domicile in the City of Fredericksburg until after the results of the election are clear.

To show just how serious he is about selling his home, according to the filing, it is currently for sale by owner and listed well in excess of its fair market value. He clearly doesn’t want to sell it until he sees if he wins. I’d hedge my bets if I were him too. After all in 2008, he ran for Fredericksburg Commonwealth’s Attorney and lost in a three-way race – finishing dead last.

According to the filing, the facts are clear in this case that Olsen never intended to abandon his residence in the City of Fredericksburg and establish a new domicile in Stafford County:

(24) There are substantial facts and attendant circumstances present in the instant case which show that candidate Olsen never intended to abandon his residence in the City of Fredericksburg and establish a new domicile in Stafford County, including, but not limited to, the following:

(a) Defendant Olsen’s family did not accompany him in his alleged move to Stafford County; and,

(b) Mr. Olsen’s teenage minor child remained in the Fredericksburg City Public Schools during all relevant times addressed herein, including at the present time of the filing of this petition; and,

(c) Mr. Olsen purportedly was staying above a garage that was not zoned for occupancy and the address given by candidate Olsen on his Statement of Qualifications was not an address recognized by Stafford County; and,

(d) That candidate Olsen used as his mailing address the Post Office Box for the Office of the Commonwealth Attorney; and,

(e) Mr. Olsen listed his home as for Sale by Owner, but listed the home at a selling price that upon information and belief was far in excess of its fair market value; and,

(f) Upon information and belief, Mr. Olsen frequently did not stay in said garage at 1257 Poplar Road during the relevant period of time, but instead continued to use his home in the City of Fredericksburg as his principal place of abode and dwelling, in company of his wife and teenage son.

I’m sure that Olsen never knew that he actually has to live in Stafford County to run for office in Stafford County. Just like he never knew that he couldn’t infringe on a well-known trademark or that he couldn’t accept campaign contributions from foreign nationals. You’d think that someone running for Commonwealth’s Attorney would pay particular attention to the law and not continuously run afoul of it?!

Given the facts of this case, things are not looking too good for Olsen’s candidacy. On the bright side, he has four whole years to establish permanent residency in Spotsylvania County. As the old adage goes, “If at first [or second] you don’t succeed, try, try and try again.”

You can read the full petition here.