NOT Wanted for the Innovation Economy: Cucinelli & Co. 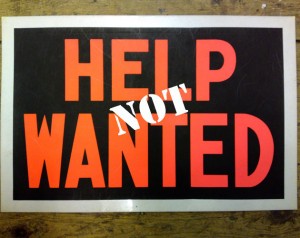 March 10, 2013 – Republican Attorney General Ken Cucinelli, the presumptive Republican nominee for Governor, opened up his Fredericksburg area campaign office over the weekend.  Joining him were Cong. Rob Wittman, Del. Mark Cole and Sen. Bryce Reeves, all of whom spoke of their support for less government.

I guess it’s not surprising that these Republicans support Cucinelli, the darling of the right-wing.  Cole and Reeves’ actions and voting records on social issues clearly show their right-wing credentials, and Wittman is so scared of a primary challenger that he will say and do anything to appease the far right.  As I wrote in a previous blog, Wittman has put his intelligence and common sense in a blind trust to secure his place on the Republican ballot.  He has chosen to even forget his career as a biologist to endorse Cucinelli, who doesn’t believe in science or evolution, and spent a lot of his time as A.G. and taxpayer money to sue a UVA researcher, who wrote about the dangers of climate change.

In addition to their rhetoric about smaller government, Cucinelli, Wittman, Reeves and Cole will tell you that they are pro-business and worship at the altar of the private sector, though they haven’t spent any real-time working in the private sector.  They will repeat the Republican mantra that less government, less taxes and less regulation will cure all of our ills and create economic nirvana.

However, Virginia’s economy is at a crossroads, and it’ll take more than this worn-out talking point to create a prosperous path of opportunities for all Virginians.   Our over-dependence on federal contracts will become tested over the next several months as federal budget cuts kick in.  Some business leaders and politicians understand the challenge.  They have been working together to lay the groundwork with public investments and policies to foster innovation and tech-based economic development.

This is a new economic era – the innovation economy – that requires a new mindset.  It requires leaders willing to rise above their narrow ideologies and partisan needs to understand the needs of this new innovation economy – e.g., collaboration between government and business on research, investments and workforce development – including an understanding of the more tolerant social beliefs of new workers needed to make this economy thrive.

What this new innovation economy does NOT need is Ken Cucinelli, or people who think like him: Wittman, Reeves and Cole for starters.  Cucinelli wants to cripple and shrink government.  He attacks researchers.  He attacks women’s rights and gays.  He attacks the very things necessary to transition Virginia to this new future.  A Governor Cucinelli will do things and say things that will brand Virginia as an intolerant place to work and live.  He will promote policies that discourage public-private collaboration and investments.  No emerging technology company, and no young worker who works there will want to stay or come here.

In short, if we want to wean ourselves off the federal dole and transition to the innovation economy; if we want to enhance Virginia’s brand as the best place for these new emerging businesses; if business leaders care about their bottom lines; if voters care about creating a better future, they do not need to hire Governor Cucinelli as Virginia’s CEO and top salesman.  They need to vote for McAuliffe, a successful businessman who gets it.